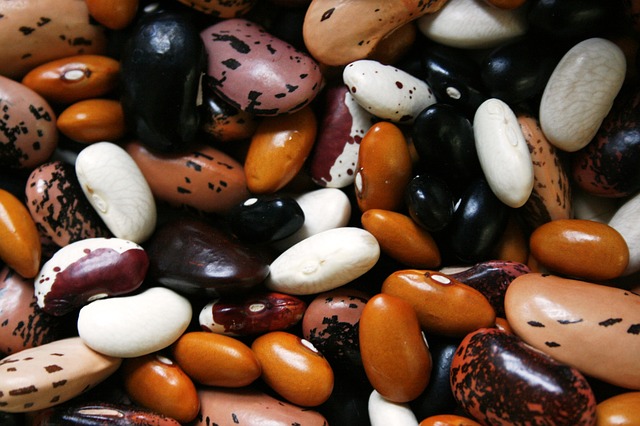 With its kidney-shaped seeds embedded in hanging pods, its papilionaceous flowers and its characteristic vine-like growth; the common bean, Phaseolus vulgaris, is a plant that has feed humans, cattle and even fairy tales all along its long history. This plant is originary from the american continent, where it was domesticated independently by the inhabitants of mesoamerica and the Andes. Indeed, it is still  a main component of the diet and gastronomy of those regions. Current varieties come from both domestication centers, making the bean an uncommonly diverse crop plant in genetic and phenotypic terms. The bean arrived to the Old World with the arrival of the europeans to America, being gently adopted by many countries and spreading all over the world. Thanks to its association to nitrogen-fixing bacteria from the Rhizobium genus, the bean allowed north american natives to develop crop rotation of the “three sisters”, alongside squash (Cucurbita sp.) and maize (Zea mays). Beans are rich in essential amino acids, and thanks to the wide number of varieties available and its culinary versatility, they can be enjoyed daily.

Phaseolus vulgaris joins phylomeDB as part of an international team for the genomic study of the mesoamerican bean. This work provides a comparative framework for the evolution of the bean, both compared with other plants and between the andean and mesoamerican varieties. Analyses of gene expression suggest that lncRNA are expressed preferentially in seed tissue, in a pattern similar to what is observed in mammalian testes. Evolutionary analyses show that most lineage-specific gene expansions are shared by both andean and mesoamerican bean, implying that many of the desirable characteristics of the bean appeared before the domestication process. You can browse phylomes 8, 9, and 10 and find out more information in the associated publication: