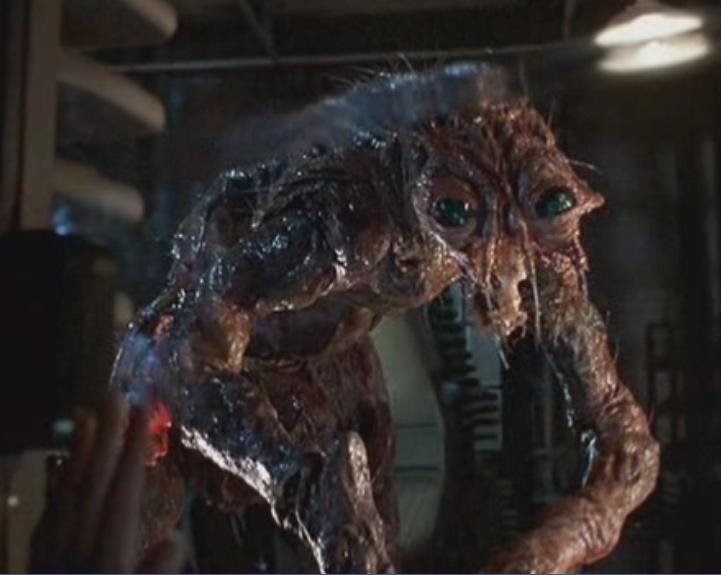 “I'm saying...I'm saying I-I'm an insect who dreamt he was a man and loved it. But now the dream is over... and the insect is awake.”

The one who spoke was no more a man. Alone, turned into an abhorrent monster after that fatidic event, he desperately tried to find a cure for his “condition”. The transformation is slow but steady, and horrible his new body may be, it is nothing compared with the degradation and decay of his human mind. Finally, as the movie progresses we contemplate one of the more unnerving transformation scenes in the history of hollywood: Brundle’s moulting into “Brundlefly”.

Based on a short history written by George Langelaan and a previous cinematographic adaptation, The Fly tells the history of a scientist that, after an incident with a prototype teleportation machine, it gets fused with a housefly. Unlike the original story and first cinematographic version, this movie uses a gradual transformation that turns its main character into a monster, both physically and psychologically. This monster, as much as dangerous and horrible it may be, is in the end just a sick man trying to confront his disease, trying to avoid the vermin to devour what make him himself. With the moulting scene, the movie shows that Brundle was a mere cocoon, an empty carapace containing something else, the man as the prison of the beast. 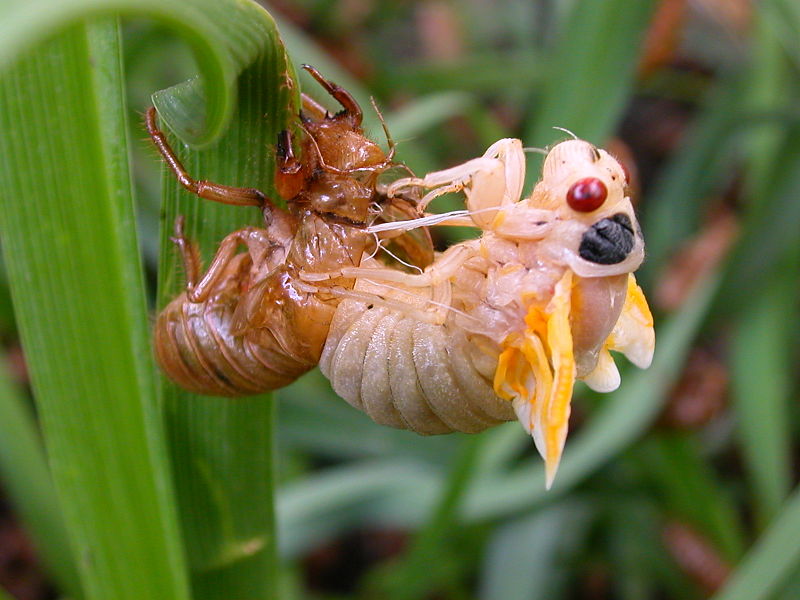 Moulting, also known as ecdysis, is the main feature defining a wide group of protostome animals, the ecdysozoa. Ecdysozoa contain more species than the rest of the metazoan together, easy task when you have on your side both arthropoda and nematoda. The group also include the lesser known onychophora, tardigrada, nematomorpha, kinorhyncha, priapulida and loricifera. All these animal suffer moulting during its development. Moulting must not be confused with metamorphosis. Not all ecdysozoans experiment metamorphosis, and metamorphosis itself is a specialized form of moulting that implies profound morphological and physiological changes. Moulting is a necessary evil for all these organisms. They have experimented a great ecological success thanks, in part, to their chitinous cuticles and exoskeletons. However, the protective nature of such structures is an hindrance for the growth of the animal. The solution is to regularly break the walls, grow fast and rebuild the defenses. In other words, ecdysis.

The transformation of Dr Brundle was, as expected from a horror story, unavoidable. But what would happen to a real fly in the opposite situation, if it were unable to undergo ecdysis? This is exactly what happens to Drosophila larvae that have a mutation in any of their halloween genes. The members of the family have “tematic” names: Spook (spo), Spookier (spok), Phantom (pht), Shadow (sad), Shade (shd), Disembodied (dib) and so on. All of this proteins are involved in the synthesis of certain steroid hormones that regulate the normal development of the ecdysis process, the ecdysteroids. Ecdysteroid biosynthesis is complex and implies many steps modifying a basic polycyclic structure. Most of the involved proteins contain a cytochrome P450 domain that catalyzes the necessary oxidation-reduction reactions. As we can see in our tree of the month, this is a huge family that is involved in many important physiological functions across all domains of life, and is characterized by its heme cofactor. With the failure of any of those genes normal ecdysis is compromised. The embryo dies at early stages with an amorphous shape and an abnormal cuticle, and long ago some scientist decided that those aborted flies looked like ghosts. Steroid hormones are based on chemical modifications of cholesterol, and are commonly found in metazoans. These hormones are usually involved in signaling pathways that implies drastic genetic changes, as their receptors are usually found in the nucleus and affect DNA expression directly.

First photography: photogram of the movie The fly (1986).

Third photography obtained from: https://blogs.brandeis.edu/flyonthewall/halloween-special-the-drosophila.... Itself an adaptation from Gilbert LI (2004).